The Beginning of the High-Five

Hey, man!  That was some hunting you did yesterday!

What are you doing?!

What did I do?

I’m just trying to congratulate you.

Your hand is raised by your head.  You made a move that I had to duck to avoid.  How is that not a slap? 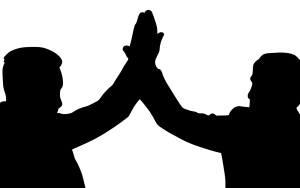 This is the new idea I had this morning.  When someone rises above my expectations, I try to smack all five of their fingers.  You know, a “High-Five”!

So if I do something really well… your response is to strike me?

I need my hands.  And half the time I’m carrying my weapons.  Can’t you, I don’t know, bump my elbow as we brush past?

No, that’s no good.  See, I was practicing this morning—

Yeah, with my hand.  By myself.

Man, I don’t want to hear this.

Yes you do!  See, if you strike two hands together, it makes a really satisfying noise.

Yeah, Mike invented that last week.  He called it “clapping”.

Ugh.  Don’t get me started on Mike.  What a Neanderthal.

The basic concept of a “clap” is fine.  But it needs something more.  Pizzaz.  We need to really celebrate an excellent achievement.  A “clap” is when you think somebody did well.  But the “High Five” is the best of all greetings!  It shows not only respect, but conveys just how cool you really are.

You’re saying weird things.  Are you sure you cooked your meat last night?  I know you like it raw, but sometimes you get… um, kinda off.  Like when Joe sleeps outside on top of the hill.  And he gets ants all in his clothes.  And you see him muttering to himself, going all feral.  Scratching himself with his legs while picking at sores with his fingers and talking in that low voice about his loyal compatriots…

Joe’s a few sticks short of a fire.

You really should try it, man!  We could walk up to each other, and without stopping, smack each other’s hand!  It makes a loud noise and we would look so cool!  All the other guys would be jealous.

Couldn’t you smack somewhere with more padding?  You seem way too excited about this.  I think you’ll break my aiming hand.  Maybe just hit my butt?

Weirder than hitting my hand?

I know where you sit.  And I’ve seen those berries you love so much.  I know the effect they have on you.

Then refrain from touching me.  I won’t be offended.  I promise.

C’mon!  It’s fun!  Don’t make me go back to wrapping my arm around your neck, pushing you down, and rubbing my knuckle into the top of your skull.

My scalp’s still sore from that.  Last week was a real low point for your, “innovations”.

Hey man, Noogie thought it was a great idea.  He can’t stop doing it. 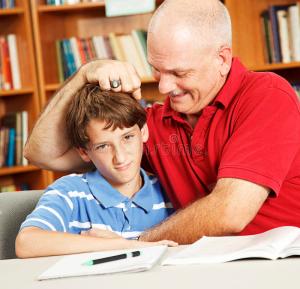 And nobody shares their meal with Noogie.

Just think.  If we do it right, we can “High-Five”, swing our arms down and do it upside down, and then squeak out one last “High-Five”!  Three satisfying whacks in quick succession!  And the best part–

–We do it all without stopping!  We keep walking the whole time!  Maybe we slow down our pace a little; I haven’t worked it all out, but think of it!  The fluid motion!  The excitement!  The awe from the onlookers!  Smack-smack-smack!

This whole talk is making me want to smack you.

No, I mean, in the face.  Repeatedly.  A plain, old-fashioned, non-cool, SMACK.  Maybe with a pole.

I don’t get you, man.  You hated “Noogies”.  You won’t “High-Five”.  You didn’t even give my last suggestion a chance—

The “Chest-Bump”?  Stop.  That was the worst of the worst.  Taking your whole body and throwing it at each other?  All that forceful contact… and it was supposed to be fun?  That was a complete and utter step backwards in our development as a species.  Only Dude liked that gesture.  The rest of us were ready to tie you up and throw you off a cliff.

Or use you as bait.  Tie you to a tree or something.  Wait to see what animals might come out to eat you.

You’d rather use me as a hunting lure than give me a “Chest-Bump”?

Yes.  Very much yes.  Dude used to only throw himself at the ladies.  Now he throws himself at everyone.  Really thrusts up against everyone he meets.  He keeps knocking over the kids and falling on them.

He’s not doing it right.  The guy’s not real civilized yet.  You only “Chest-Bump” your peers.

How about you keep to your personal space and I’ll keep to mine.

What is that supposed to mean?

See my hand up here?  Waiting for a proper “High-Five”?

If you don’t reciprocate, then you’re leaving me hanging.

Hanging what?  You’re not hanging from anything.  Nothing is hanging from your hand.  You’re just standing there with your arm fixed at a right angle.  Like a creepy wave that doesn’t move.  It sticks out and scares everyone away.  The slowest wave mankind has ever seen.

…What if I bump my fist into yours?

It’s too early for this. 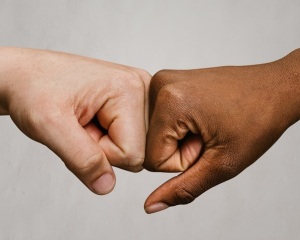 It doesn’t make a satisfying sound.  Which is the worst part about it.  But the visual!

I haven’t even washed my beard yet.

Here, look!  One fist on top of the other.  Then they switch and do it again.  Then, then!  The best part of all!

I should show you my favorite rock.  Get it real up close to your face so you can see all the fine details.  I’ll even make it exciting and throw it at you.  Hard.

Boom!  We mash our fists together!  Knuckle to knuckle.  Ooh!  Ooh!  Idea!  What if we start off as a “Fist Bump”, but it turns into a “High Five”!  We could have it change with each person!  Custom refined for each pair!  The longer and more complicated we make the hand gestures, the cooler it’ll look!  We could wave our hands like fish in the river or do double-taps!  Do a high hand smack and a low hand smack!  It could go on for so long!  The “Fist Bump” could be the start of a revolution in cool greetings!  Or maybe it should start with us grasping hands, and the “Fist Bump” could be the quiet and restrained end to our explosion of coolness!  Yes?  No?  Where’re you going?  Man!  I’m trying to teach you something.  Come back!

Minutes later, he would encounter Joe and succeed in the first ever, two-person High-Five.  Joe soon became a fan because of how the interaction killed several of the pesky flies that were circling around him.

And it continues on…

He's a simple enough fellow. He likes movies, comics, radio shows from the 40's, and books. He likes to write and wishes his cat wouldn't shed on his laptop.
View all posts by Cosand →
This entry was posted in Uncategorized and tagged beginning, early, first, friends, greet, humor, initiation, interaction, life, starting. Bookmark the permalink.