The Covid of Many Colors

I have held off on saying this because it feels rather pompous and self-centered.  However, it keeps being true.  I am going to go ahead and admit the following.

For the past few months, I have essentially been living out the story of Joseph.

Up front, let me say that I am not as important as Joseph.  I am not a king’s assistant, I do not save countries with decrees, and I have never lived anywhere near Egypt.  We are talking broad story strokes, not an exact line up.  Ready? 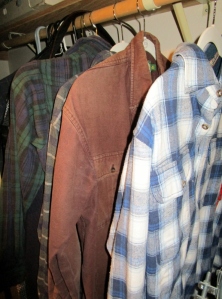 No coat of many colors, but I do have a closet of many flannels.

Okay, I was ousted rather abruptly from my work family.  I thought we were fine.  A few folks felt differently.  Accusations were made.  Soon I was kicked out.  I was thrown down the well of unemployment, if you will.

It took a couple months to lock down a new position.  While I looked, I kept working at my comic shop and I went back to working at a movie theater.  What we all truly want for Christmas are three part-time jobs.  (As you will see, that paid off later.)

I thought I wanted a full time job.  I was going to work the comic shop one day and get a real full time job.  That is not what God gave me.  I was offered a part time grocery gig making noticeably less than my last position.  Yet it felt like the job I was being led to accept.

I put up all the obstacles that I could.  I have long wanted someone to just hand me a job.  So, a recruiter contacted me out of the blue.  I told them, “I won’t work Sundays!”  They said okay.  The hours were okay; nice early shifts.  Yet I wanted benefits.  “Oh, we give benefits for part timers too.”  “Well, I will not work those late night shifts that you asked about.”  “Okay.  Fine.”  I was irritated that they did not offer a bus pass.  “Oh, we do.  We don’t talk about it in the application process.  But we do.”  I asked if I could work one less day so I could keep the movie theater for variety.  They said sure.  Finally, I asked if I could leave early one day to pick up hours at the comic shop.  That was fine too.

Not a short list of demands.  They all worked out.  I called that a minor miracle.

Right.  There I am.  In a strange new land of unemployment.  And I was blessed.  God rewarded my efforts.  My coworkers like me.  I am trusted with responsibilities.  My manager sends me texts saying that I am awesome.  My supervisor claims in my review that everybody likes me.  My coworkers tell me that they love me and that I am funny.  Not on the same level as being in charge of a prison or being a king’s second-in-command, but I did not have to get arrested either.  Let us call it a draw.

Slowly but surely, Covid starting changing the work place.  Locations started to close.  Doors started to be bolted shut.  Cities started to shut down.  The last job I had was in a big city building.  That building closed.  The grocery store that I am now at suddenly became “essential”, according to those in power.

One part of me is fascinated at how effortless it became for me to earn income.  Overtime was easily had.  Extra shifts appeared from coworkers that lacked childcare or wanted to visit their families.  Whether people gave them to me or I asked my boss; I would up with all the shifts I needed.  Then my bosses decided to go and give me a raise.  I am prospering.

At the same time, I have to assume that those that ousted me are suffering.  Their place of employment is closed.  They had a hard enough time paying rent before.  I have not kept in close contact with the “jealous brothers” of my story.  I was not led to worry about them.  They had their lives and I had mine.  However I do not want them to suffer.  That dark part of me does, certainly.  In the end, I want people to feel as blessed as I do.  I hope they are doing okay.

Meanwhile, my “seven years of plenty” have been playing out over the last few months.  The crops are doing just fine.  The government gave me a check which I did not need as they strive to boost the economy.  The comic shop had to close, but my manager started a fundraiser to help with expenses.  Nerds love their comic shops.  They gave funds.  I ended up with a few hundred dollars that I had not asked after.  My parents keep sending me money each birthday no matter how I try to dissuade them.

Then, today, the newest installment hit.  The movie theater that I work one day a week at secured some sort of payroll protection.  I do not know the specifics, but it appears that I will keep getting paid for eight more weeks.  If we open back up, I have to go back to work.  (Which is fine by me.  I could use a break from the grocery life.)  Should things remain unchanged, I still get paid from this fund.

I should mention a quirk or two with that change.  First off, my boss at the comic shop encouraged me to file for unemployment.  He does not know when we would reopen.  If I was on unemployment, I would not be allowed this payroll protection.  Surprise.  Second, I cannot take it if I have a full time position.  The grocery store is currently giving me full time hours because we need the staffing (so many folks calling out sick; so many), but they label me as part time.  Thus, I am eligible for the program. 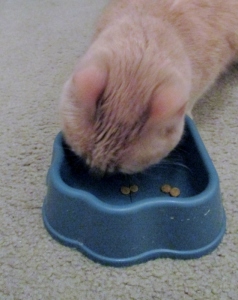 I don’t feed the masses, but I feed one furry mass.

In the last month I have paid my taxes, paid my cat’s license fee, paid for my driver’s license, my rent, and am about to pay for my car tabs.  (All my debts come due this time of year.  ‘tis irksome.)  All were met with no financial stress.  I am enduring the “seven years of drought” much easier than I should be.

The trouble is finding how to feed the rest of Egypt.  Again, I want others to be as blessed as I am.  I need to take my time and figure out where this money will do the most good.  Perhaps God will keep shoving funds at me until I responsibly give it all away.

I was cast out.  I was left to suffer.  I was taken in.  I was tested and found acceptable.   I proved myself in a new world.  I benefited while many around me started to fray at the edges.  (Supposedly one in seven people have lost their jobs in the last month.  Lots of sevens in this blog.)

In the structure of our stories, I see lots of similarities in my recent tale and Joseph’s saga.  The plot points line up.  Except that he helped plenty of people and I am still searching for wisdom in that area.  Why cannot everyone be as blessed right now as I feel?  Why is it that when I go to the grocery store lately, eighty percent of what I want, and one hundred percent of what I really want, is on sale?  My sale-timing should work out for all.

I do not have many answers.  Maybe when I see the other side of this “seven years of hunger”, I will know more.   (Unlike Joseph, I cannot interpret visions.  My dreams tend to be pizza-fueled, not God-inspired.  Gassy, not holy.)

He's a simple enough fellow. He likes movies, comics, radio shows from the 40's, and books. He likes to write and wishes his cat wouldn't shed on his laptop.
View all posts by anecdotaltales →
This entry was posted in Uncategorized and tagged bible, blessed, blessing, covid, employment, genesis, God, jobs, joseph, life. Bookmark the permalink.

2 Responses to The Covid of Many Colors