As has been stated many, many, many, many times, I have worked in a comic shop for quite a spell.  I have spent a few dollars here or there, read tens of thousands of comics, and have helped my boss set up her booth at a comic book convention.

What I had yet to do, was actually attend a convention.  San Diego is a little far from home, hosts maddening crowds, and has turned into a Hollywood film-fest.  Even nearby Emerald City sounds a bit intimidating for a first timer.  (Also, I usually tend the shop while the boss is working the show.)   However, the Jet City Comic Show sounded about my speed.

I came across a pair of free tickets.  I invited one of my nerd friends to tag along and guide me through the con world.  I feel I chose wisely.  In the two hours of commuting time, and the two hours we spent at the show, we probably spent three and a half hours talking about comic books.  That suited us just fine.

Being Seattle-types, we were shocked to find free parking only two blocks away.  As an added bonus, it was on a street that shared a comic book connection.  We were off to a fine start.

We went inside, exchanged our passes for tickets, and were let right into the convention.  There was some sort of line forming, but we simply walked in the doorway and everything was laid out before us.

We walked around, taking it all in; figuring out the layout of the floor.  One should always peruse the guest plan before going.  I had not seen any huge attractions that made me drool.  There were some folks whose work I recognized, but none that I absolutely had to meet.

There was plenty of new stuff to see.  A fellow named Jeff Carpenter had some fantastic art.  Bats in a Batman suit.  Wolverines as Wolverine.  Panthers as Black Panther.  You get the idea.  I had never heard of Jordan Kotzebue, but his work looked intriguing.

Personally, one of my favorite anthologies is the Flight series.  If you can find them, all eight books are chocked full of gorgeous drawings.  And Michel Gagne, who had work published in six of those books, was present.  He was my one, “get”.  And he was the reason I was lugging around a bag with twelve hundred pages in it.

There was a woman in front of me, but she was spending a reasonable amount of money and was very excited at being there, so I was in no hurry.  She probably paid for her tickets.  She was spending her Saturday here.  No need to rush.  We were all happy nerds.

Five or ten minutes later, it was my turn.  I warned that I was asking a favor, and pulled out my massive bag.  He seemed to realize what the books were as I started to empty the bag, but I think everyone was relieved when I pulled out six large books, not several hundred small ones.  We talked about his story that ran through the books, how he wished he had been in the eighth, and how he still had ideas for the main character.  Since he was nice enough to sign my books, I perused the other works that he had for sale.  I settled on a small book, which he also signed, and was only too happy to hand over some of my money.

That was it.  That was my sole purchase.  I was not there to decorate my walls or score some convention swag.  I was there for the experience and the atmosphere. 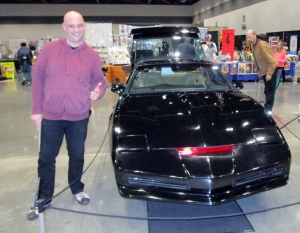 He wanted a picture with K.I.T.T.  Done.

My friend was a little freer with his wallet.  The first purchase came when I introduced him to my friend Rob.  Rob works at the comic shop with me and I have been gifted several original sketches from him and purchased two of his t-shirts.  My favorite piece of art from him revolves around Galactus.  I mention it to anyone who will listen.  And my friend listened.  And he bought a print.  Hey, he got it personally signed by the artist?  Why not?

The most interesting/ humorous/ frustrating part of my friend’s shopping involved a vendor and her phone.  Once upon a time, you had to go to a convention with hundreds of dollars in cash.  Vendors and artists only had portable tables.  You hit the ATM before you came, if you did not bring enough money you had to come back with more money, and one always had to be self-conscious about how much cash they had on them.

No longer.  Now, with smart phones and adapters that plug into headphone jacks, anyone can swipe credit cards and have the information go through their portable technology.  People can even get receipts e-mailed to them.  It all works great and makes life simpler for everyone.

To top it all off, before noon the on the first day of the convention, the ATM went down.  Good times.  Eventually, my friend and the vendor decided on a PayPal exchange and that worked fine.  Technology saved the day.  Of course, if technology had cooperated in the first place.  Oh well.

As long as there are cosplayers, there will be Catwomans.

Granted, that is the slight downside to a smaller comic show.  We were all a bunch of nerds celebrating our hobby with hundreds of other nerds.  There were TV actors.  There were authors.  But mostly, folks simply wanted to meander about and see what there was to see.  There were panels, cosplayers, and booths from local comic shops.  There were swords to buy, cosplayers roaming, and old gaming systems.

(I almost bought a NES cartridge, but I only use that system once a year or so.  They almost had a sale though!  …of seven dollars.)

The draw of this show was not the promise of glitz and glamor.  We only wanted to be nerdy for a weekend.  It was easy to do that with the short lines, the reasonable-sized crowds, and the friendly folks all around.  It was, dare I say, fun. 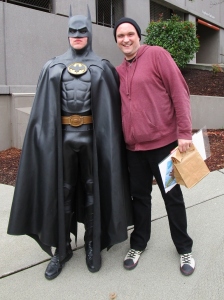 On our way to the car, we met Batman.

I would partake in this sort of comic-centric activity again.  I would certainly take a friend along.  It gave us both an excuse to vent, gush, and laugh with someone.  Sure, you can do it all by yourself and internally, but there is more joy when you have another person’s energy to feed off of.

Meeting established pros would have been fun too.  There are artists whose work I have been following for years that I would like to watch as they draw and sketch.  However, I can content myself with enjoying the finished product.  I do not need to see all the behind the scenes work.  It would simply be a fun perk.

For the time being, I was quite happy to be surrounded by friends and folks that enjoyed this nerdy world as much as I did.  It was a trip well worth the taking.

If you have not seen “The Rcoketeer”, you must.

I can not remember who sculpted these, but that one of the left is pretty great.

Armies of LEGOs ready to march. 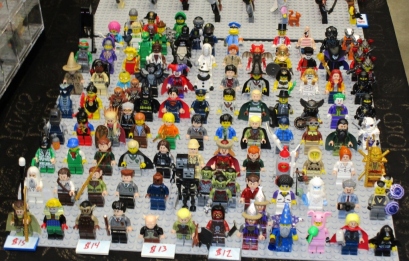 So many LEGO guys.

I just assumed they were all sharp. I did not test that theory. 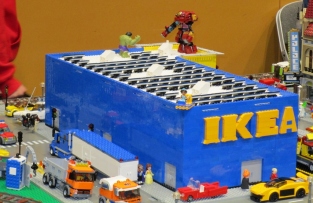 He's a simple enough fellow. He likes movies, comics, radio shows from the 40's, and books. He likes to write and wishes his cat wouldn't shed on his laptop.
View all posts by Cosand →
This entry was posted in Uncategorized and tagged comic, convention, creators, emerald city, geek, jet city comic show, nerd, san diego, superhero, tacoma. Bookmark the permalink.