If I have learned anything from Brad Meltzer novels, it is that people like to talk about their lives.  If they have a job that allows them to share little behind-the-scenes moments, then so much the better.

I have a degree in Mass Media.  I know someone who works at a TV studio.  So you can see what I asked her to help me with. 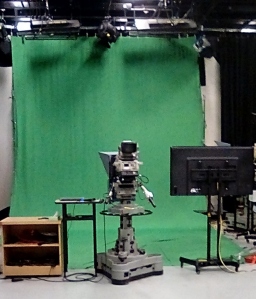 I think what quickly hit me was how woefully unprepared I would be to work in such a field.  Even while I was in college, I knew that there with other universities with a much greater program than the one I was attending.  Whatever advanced training we were going to get would have to be through internships.  And I was far too timid (and lazy) to try for one of those.

Everything is computerized.  Everything.  Recently the TV channel was bought by a larger company (as are most channels these days), so it all gets shared by the head corporation.

They have a main control room.  That room keeps watch over the thirty-nine different channels that the companies sends out during the day.  This is in addition to a floor filled with cubicles.

The main staff are split up into groups.  The place is littered with half-cubicles; walls reaching over three feet high are there for structural reasons only.  As I toured, I was well aware of the forty or so people that could watch my every move.  I want to believe that they were too busy fielding phone calls and working on the radio station that is housed in the same building.

What surprised me were the number of people with earbuds in.  Apparently there are people whose entire job is to listen to news broadcasts all day.  (I assume they would have to stay alert and listen for anything they thought was worth reporting.)  That would torture me.  I have a hard enough time keeping up with the news for five minutes a day.  To do that for eight hours, five days a week?  Can you imagine how many times they hear the same news story day after day?

Everything is automatic.  Except, apparently, the TV screens behind the anchors.  I watched as someone came into the studio before a broadcast and had to use the same remote to turn on a four by four (three by four?) TV grid one by one.  And, as we all know, there is always that one pesky piece of equipment that will not turn on the first time.  😉

An entirely automated world.  Digital this, rebroadcast that, pre-programmed.  It was interesting to check in on, but my old-fashioned dreams of being a radio broadcaster are much preferred to the reality of working in this world.  Though, sad to say, I think much of that is all electronic too.

What’s an analog guy to do?

He's a simple enough fellow. He likes movies, comics, radio shows from the 40's, and books. He likes to write and wishes his cat wouldn't shed on his laptop.
View all posts by anecdotaltales →
This entry was posted in Uncategorized and tagged broadcasting, life, media, news, newscast, newsroom, reporting, studio, television, video. Bookmark the permalink.