My family was in town.  And spending time with family uses up my energy.  So once again, I let myself get a little lazy.

There are two parks that are scant miles from my apartment.  Maybe a twenty minute drive.  But there is a really great park that is halfway between those “other” parks and my home.  Why drive further when you have perfection?

Because you might find other great parks, that is why. 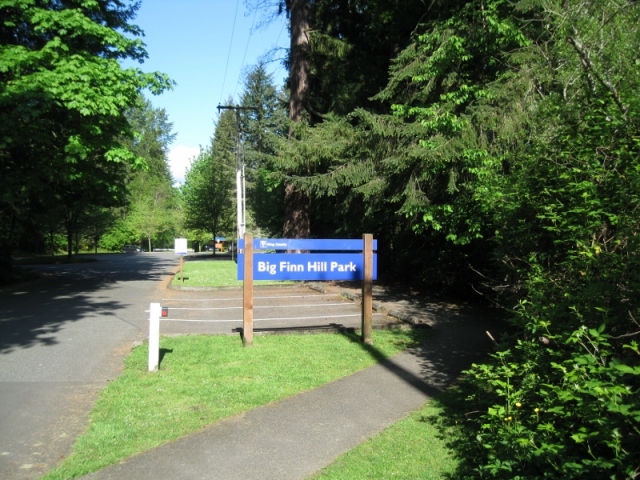 Big Finn Hill Park is located right next to a school.  Possibly two schools?  (The park was big enough that I got turned around.  For me, that is not saying much.)  It fills the role of a school park quite well.

The most visible parts of it are fields.  Fields for sports.  Fields for running.  Fields for playing.  Fields a plenty.  However, nestled in the nooks and crannies is a rather decent stroll throw a meadow-y, algae-filled world.  A nice, nature-filled distraction from studies.  I think a kid could get rather lost on their recess.  Sometimes, though, that is the whole point.  😉  A fine park?  Sure.  A perfect park?  Well, that depends on how much you like biking.

On every portion of the trail you will find bike-tracks.  Muddy portions become one big tire-world.  I think I entered right after a group had set off, so I never ran into them.  I kept my ears open all the same.

Mud, muck, and plenty of algae.

Quiet streams and all.

Bikers abound, and they left proof. 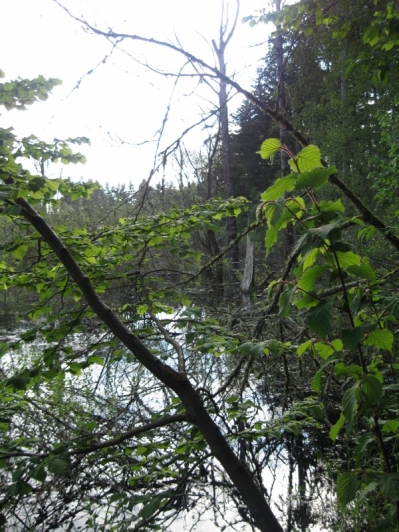 I’m sure herons are happy to be nearby. 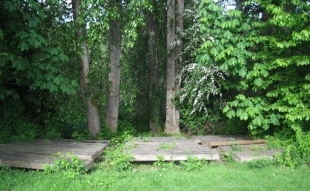 I do appreciate the outdoor lecture environment, but I doubt it would have kept my attention as a youngster surrounded by trees. 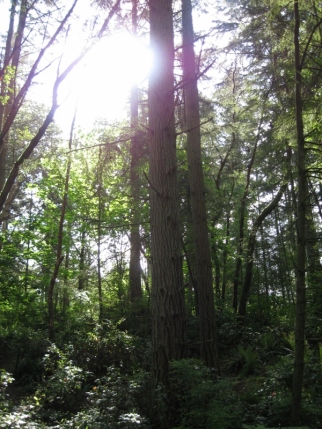 And those trees are nice and tall, too.

Need to get away from a corner of the world while still being in audible contact with it?  Then you are all set here.  Want to forget the world exists?  …find somewhere else.  It is civilized and populated; just barely.

Juanita Beach on the other hand, is there just for show.

Go to the edge of Puget Sound.  Build a long bridge that you can walk around and through.  Never really go past a section of beachfront.  The end.

That is Juanita Beach.  Yeah, there is a playground and a volleyball pit.  Sure, there is a little walkway that informs you about the area and its habitat.

And yes, boys still go fishing. But now they have screens for “scenery”.

This is about the biggest sailboat you’ll find here. 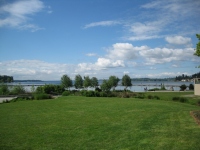 A field, but one that would fill up quickly on a sunny weekend.

Really though?  It is a spot to stare out at the water.  A casual strolling area.  Not that there is anything wrong with that.

And, just so you feel like you’re really there?  A rather large image of the whole waterfront.  Makes you feel outdoorsy already, doesn’t it?

So I have seen better parks.  However these would help me unwind long enough until I had time to do a full-on exploration adventure.  Sometimes a little is all you need to set you right.

He's a simple enough fellow. He likes movies, comics, radio shows from the 40's, and books. He likes to write and wishes his cat wouldn't shed on his laptop.
View all posts by Cosand →
This entry was posted in Uncategorized and tagged beach, big finn hill, forest, juanita, kenmore, life, park, tourist, visit, woods. Bookmark the permalink.