Posted on January 10, 2017 by anecdotaltales

As you might have guessed from my list o’ media, I tend to live a rather stable life.  I work a rather standard job, come home to my standard TV and book offerings, and eat a standard meal.  When someone asks me, “What’s new?” I have little to offer.

I am attempting to change that.

Therefore, I am trying to experience something new each week.  Not, “go to the theater and see a movie I have not seen before”.  I have done that.  No, I want to actively participate in something that has not happened to me.  See a sight I have not.  Hopefully I can think of fifty-two things to do.

Week 1- Answering the door in a bath towel

I was raised a clothing-conscious person.  Cover it up; that is my school of thought.  Wear practical clothing.  I will never understand cooking naked or sleeping without pants on.

New Year’s Day, I found myself in my typical routine.  I was taking a bath, relaxing, and letting the cat sleep on the bathroom floor.

No one visits me.  They certainly do not visit me on a Sunday.  I contemplated the steps of drying off enough to put on a shirt or calling out, “just a second” while I put on the full complement of clothing.  But no.  I was already in the mood to try something different.  And they were the ones intruding on my free time.  Darn it; let them see me in a towel.

A glance through the peep hole revealed my attempted intruder.  It was a pizza delivery gal.  (From what I have heard, plenty of people feel just fine ordering pizza and opening the door naked.  Such is the price of working in the service industry.)  Towel around my waist, I pulled the door open enough to poke my head out, but not enough to let my cat run free.

Turns out she was looking for #401.  I am #104.  Mystery solved, intruder sent away, towel-wearing achievement unlocked.  The only real downside was that I was left hungry for pizza.

But hey, it could have gone worse.

Picture if you will:  Guy answers door in towel.  Misunderstanding.  Cat runs out of residence.  Guy starts to chase after cat.  Towel gets stuck in door.  Delivery girl gets embarrassed, exits the scene quickly.  Door somehow manages to lock itself.   It is a Sunday, so no landlord.  Guy is now stuck outside with no clothing, no phone, an errant cat, and no apartment key.  A great plot for a situation-comedy.  A terrible thing for real life.

I will take the actual experience, thanks.

I have been working in downtown Seattle for about two decades.  I have done most of the big stuff.  I have ridden the Ducks, hopped on the Big Wheel, and the Monorail and I have a mutual understanding.  So I have floated on the Seattle’s waters, looked down on it from the Space Needle, and taken a concrete track between its buildings.

However, short of the tunnels in my old workplace (which is a whole other entry), I had yet to explore Seattle’s Underground.  And now, what with tourists more or less clearing out after the holidays, it seemed like the time to go.

Once upon a time this was part of an Otis elevator

I like that the foliage continues to accumulate, but the metal pile is stagnant 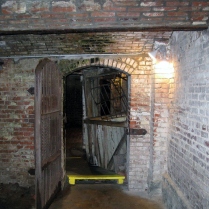 Descend deeper and deeper. And deeper 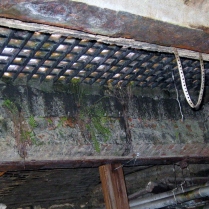 Skylights provide just enough light to see (and grow) by. Apparently the purple-tint is a chemical-reaction

I think this is one of those times when too much information is detrimental.  I know about Denny plowing the cliffs to make a flat beach-like terrain.  I read up on the Great Seattle fire of 1889.  I more or less knew what I was in for.  (Reader’s Digest version:  Pot of glue gets knocked over in paint shop.  Big ol’ fire takes out 66 acres.  Nobody dies, but Seattle decides to build sidewalks and buildings on top of the previous infrastructure.  Some areas are still accessible.  Ta da!)

The tour is only half a mile from my bus stop, so I had no excuse other than laziness.  So yesterday I took a little extra walk, paid my twenty dollars, and sat in a room filled with wood benches.

The first fifteen minutes were spent giving a brief overall history of Seattle.  The three founders of Seattle.  The problem with novices building on beach.  Sewage issues.  Corrupt politicians.  Bickering with Tacoma.  All the usual dirt that major cities have.  (Except our dirt was usually sand or sawdust.)

There is not one lengthy tunnel.  The tour goes through a walkway, back outside to an alley, around the corner, down some stairs to another basement, and so forth for about three or four buildings.  But what was underneath those buildings was pretty darned interesting to me.

Apparently the basements served multiple purposes.  First and foremost, they were a dumping ground.  Why drive all the way to a roadside ditch to toss all your garbage out when you can simply chuck them underground?  Thus, the presence of old couches, broken chairs, and many pieces of metal.

All this is contrasted with walls that were painted after the fire in the late 1800s; a green tableau spread out in the background of random garbage heaps.  It made for a unique setting as the tour guide described gold rushes, Seattle life back then, and “seamstresses”.  (Those who claimed their profession as “seamstress” were always female, did very well financially, and did not produce garments.  In fact, it could be argued that they made their money from an absence of clothing.  Ahem.)

Continued drainage problems as construction went on?  They had those.  Plague scares in the early 1900s?  Check.  Routes hidden from plain sight being used during Prohibition?  Of course.  All this and more was explained with mirth and clarity.

Over the course of a little over an hour, I learned a thing or two.  Again, it was not the great revelation that I think it was the for three dozen or so tourists that I was walking with.  However there is a vast difference between knowing an event occurred, and seeing the actual site itself.  Going through the places I had read about only served to make it more real.

Yes, the tour guide asked for tips.  Yes, the tour ended at a gift shop where they tried to sell me a book that the founder had written (which I bought) and pictures of me (which I did not.  A:  I know what I look like.  B:  Come now.  You took pictures of me in front of a green screen.  I had been in front of the actual places, but I am supposed to pay for cheat-photos?  I get the appeal, but no).  I left with an appreciation of the tour.  I have increased my knowledge about the area I work in.  And I am amused to see that, even back then, people had issues with their bathtubs. 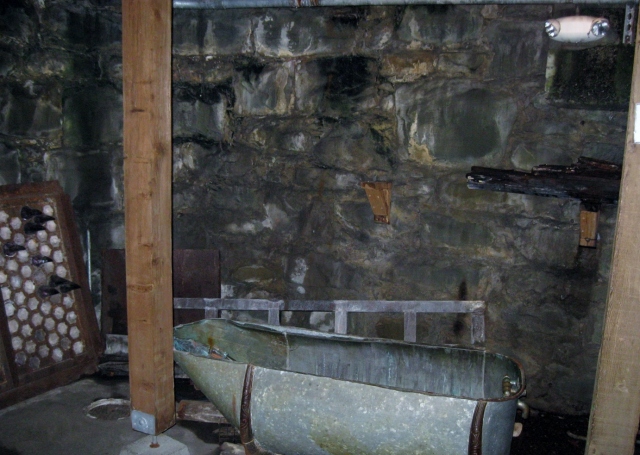 He's a simple enough fellow. He likes movies, comics, radio shows from the 40's, and books. He likes to write and wishes his cat wouldn't shed on his laptop.
View all posts by anecdotaltales →
This entry was posted in Uncategorized and tagged experience, fire, life, naked, new year, seamstress, Seattle, towel, underground. Bookmark the permalink.

6 Responses to Trying Out: Towels and Undergrounds (Week 1 & Week 2)