How to Screw Up so Terribly that Everything Erupts

Remember that time when I proved what a nerd I was? When I proved that I still had street cred among geeks (which is probably an oxymoron)? Now you get to see the other side of the coin.

I have already written about the darkest day at work that I have ever had. However, this is about something I did to ruin everything. My worst professional mistake; all laid out and depicted for you to shake your head over. Ready?

First, some background information. I was an IMAX projectionist. I like to think it takes a little more skill to run IMAX projector than a normal one. I mean, it has to. The film is twice as big. (70 mm vs 35 mm.) Here, take a look.

Back before digital projectors started to take over, projectionists had to build films. In 35 mm, two or three reels would make up a film. (If you watch old movies, you might be able to see little dots on the upper right hand corner. Those were there to let the projectionist know a reel change was coming up. Nowadays, they get spliced into one chunk of film. Also, if it is digitally projected, I refuse to call it a film. It has to be a movie. If it ain’t on film, it ain’t film!)

IMAX reels are about three minutes long. A twenty-eight minute documentary will be about a mile and a half long. The film we are going to talk about today was a pithy 20 minutes, meaning that it took six reels. 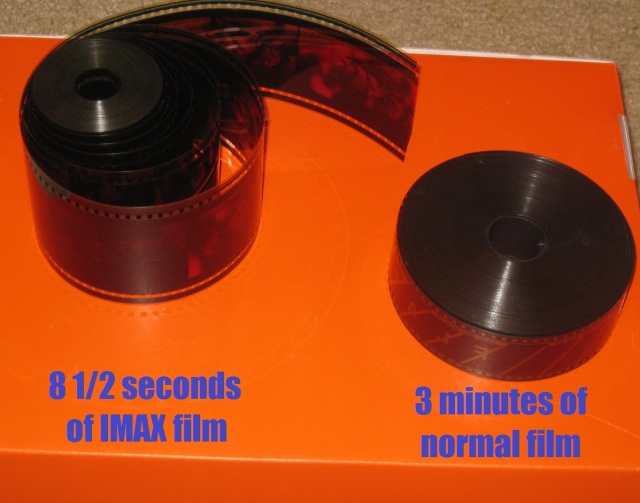 As you can see; the picture is bigger and I would offer, creates more work than normal theaters. This platter is forty-five minutes long, on a four-foot platter, weighing about one hundred and twenty pounds. The Dark Knight, Interstellar, Watchmen; these are films that clocked in over the two hour mark and therefore really filled out a platter. I think Interstellar was just short of being nine miles long. It weighed about eight and a half or nine hundred pounds. So yeah, bigger scale. (But think of the resolution!)

What do you do with these after their done? Ship them out in hundred pound cases. If you want to ship out a 3D film, you need two copies (left eye and right eye). So we are talking about eighty or so reels spliced into chunks two or three miles long put onto shipping platters. It took six cases for a two hour 3D film. Each case weighed around two hundred-fifty to three hundred pounds. The freight drivers got a little brow-furrowed when they opened the door to their trucks.

Thus endeth your 101 course on IMAX. Big stuff. I was tasked with a little project. Again, it was a short film, less than a half an hour in length. Eruption of Mt. St. Helen’s does not have a whole lot to say. There is only so much original footage to go around. Plus, what is there to talk about? It blew up. It made a mess. It stopped blowing up. Twenty minutes is plenty.

For me, twenty minutes turned into an endless torment.

Now, the film can be spliced in one of two ways. You can sonic-splice, which more or less melts the two pieces of film together. But if you sonic-splice, and you make a mistake, you have lost two frames of film at minimum. Because of that, our theater only used splicing tape. You lay a fancy piece of splicing tape so that it evenly covers both halves of your triangle-cut film. Each triangle gets covered. The end result is a splice strong enough that you can pull a truck out of a ditch with it. (Or so I was told by my trainer. I have yet to actually test that. But the splices are strong.)

Now, splices are supposed to be checked once every five hundred run-throughs. Most shows are not around in any theater for that long. Still, you want to ensure that you do a solid job so that the splice will not bust on you. Lewis & Clark: Great Journey West will always have a special place in my heart. I projected that film about two thousand two hundred times. I splice checked it maybe three times. It never gave me a problem. And it was a solid film.

Mt. St. Helen’s, on the other hand, is my albatross. I fear it, and it knows I fear it.

Again, it was only six reels. I had a more novice projectionist to help me. But, and I still lay the blame partially on this aspect, I had the crappy splicer. 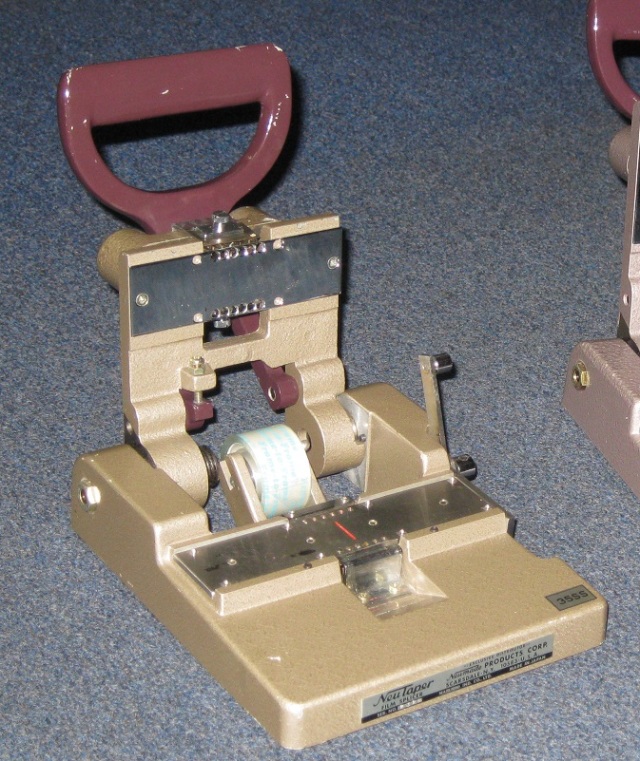 It looks all innocuous. Do not be fooled. In order to get a solid splice, you need a perfectly clean cut. Each triangle of one side of the cut has to perfectly nest in the other triangles of another side of the cut. The splicer we had in the other projection booth worked fine. I could get that one to cut no problem. The one I had? Crap. (At least for me. My boss could get it to work. But I was not as talented as my boss.)

I was nervous, the splicer was crap, but the boss had a film to build in the other booth so I figured I would give it a shot. I mean, it is not like each copy of a film costs tens of thousands of dollars. (Actually, they do. Pricey stuff.)

We start cutting. I let novice do some splicing because he can get crappy splicer to work. I try to cut. Of course, I mangle it. Call the boss over from the other booth. She fixes it. Goes back to her other film. I roll the film onto the platter. Try to cut again. Mangle the crap out of that thing. Call the boss again. She comes over to fix my mistake.

Let me take a minute to delve into my mental state here. The novice himself was fine, but he was a bit worried about me. “Taken aback”, would probably be an accurate description. Why?

At that point I had gone into fetal position. I wish that was an exaggeration, but it is not. The only difference between me and a newborn was that I was on my hands and knees instead of curled up on my side. I do not know if I had ever been that frustrated by work. But yes, I had slipped into shellshock. I was on the carpet, trying not to pound the floor out of anger; waiting for my boss to swoop in and make the world all better.

Oh, and at some point during all the splicing and assembling? We got the reels out of order. I was trying to build the tail end of the film and pull it backwards onto the platter. In theory we would start with the credits on reel six, then splice on five, then four, and so on until we got to reel one where we would add a healthy amount of head scrap so we would never touch the actual frames while threading.

At least, that is what we were trying to do. I am pretty sure reel three ended up in the wrong place. And I think one of the reels was assembled backwards. We had a tail spliced to a tail and a head spliced to a head. (In electricity, you cannot have a positive terminal hooked up to a positive connection. The same principle applies here.) Maybe only one of those occurred. I am going to say they both did; if only so you can grasp the magnitude of how much I botched that thing.

See how there are little sprockets along the top and bottom of the film?

There are supposed to be fifteen of those for every frame of IMAX film. (In a normal/ 35mm, you only need four per frame.) Well, on the frame right before the opening credits, I had taken out three. So the teeth in the projector did not have anything to grab onto as they advance. And a loose film means ripped film. Therefore, we MacGyvered a patch. A patch made entirely of tape.

Every single time I projected that film, I had a mild heart attack as that splice went through the machine. I was poised for action each and every time. It never broke on me. That was probably because at even the slightest sign that the patch was peeling away, I rushed in there and reapplied a brand new piece of tape. Paranoia can save you from further embarrassment. Truly.

To make for even more fun? I botched another section of film. We lost a frame. Then another. Now, splicing in two frames of film is asking for trouble. Two frames do not want to bend. You have to splice in at least five to encourage the film to curve through the projector smoothly. When you damage the film, you have to put in black film. That means for every time the film ran through the projector, the audience saw this blip of black on screen. An experienced movie-goer might have thought, “Damaged film”. The layman probably thought I had waved my hand in front of the lens or something. Either way, if they noticed it, it served as a distraction. Which I hate.

The goal of a decent projectionist is to have the audience forget that you are even there. The better you do your job, the less an audience thinks about you. It still galls me that, even for a moment, the viewer is taken out of the experience. And of course, that I messed up so royally.

I projected over eight thousand five hundred IMAX films in my tenure. In those thirteen years, I seriously messed up five times. (Which put me at 99.94 percent effectiveness. I was more dependable than birth control!) I trained fifteen projectionists to run a thirty year-old machine. And I cancelled shows for everything from heart attacks to fire alarms to air hose leaks.

Mt. St. Helen’s was the worst mistake (or series of mistakes) I made. Given a task, I messed up. Sure I copped to it; there was no use hiding. But that was my lowest of lows. I went on to project many more shows afterwards. That big ol’ sucker though, it should did its part to humble me.

That assignment went up in smoke. It kicked my ash. It blew up in my face. It was a (natural) disaster. Clearly, it all went horribly awry.

He's a simple enough fellow. He likes movies, comics, radio shows from the 40's, and books. He likes to write and wishes his cat wouldn't shed on his laptop.
View all posts by Cosand →
This entry was posted in Uncategorized and tagged competence, error, eruption, film, imax, mistake. Bookmark the permalink.