The Saga of a Letter

I can hear the doubt in your mind. “Sure, you claim you know enough about media (and life, and being a Quaker, and surviving life with a cat) to write a blog. But where’s your street cred? Huh?”

First off; Hi. How was your Thanksgiving? All well in your world? Glad to hear it. 😉

Second, I cannot believe you lack faith in my reputation. I mean, really. I work in a comic shop. I rooted for Supergirl before it even hit the air. I even pitched my version of a rather nerdy Justice League. That just is not enough for you, is it? Sheesh. Well then let us flip to the pages of Saga #31. It came out Wednesday, go snag it and flip through with me. Got it? Okay, now hit page two of the letter column. Boom. 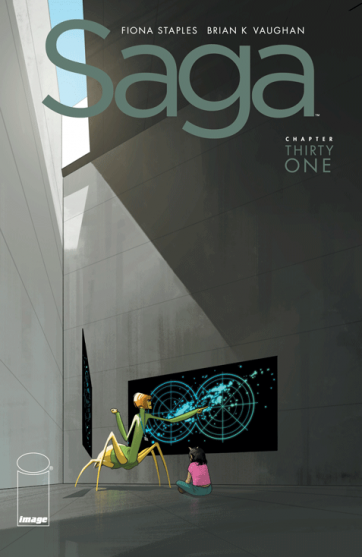 I happily and fully acknowledge that you are a talented fellow. I work in a comic shop and have absolutely no problem recommending Y, Saga, or any of your works to folks looking for a solid read. In all the times I have recommended your work, I have had only one person come back and say it wasn’t for them (“Too graphic”, they said). For the most part, once people get a taste, they come back for the trades. And sometimes, they can’t wait and come back every month for their fix. I myself read it each month. I like to keep current, the comic is expertly crafted, and the letters page is a treat. (It was a special kind of fantastic when I got to be the one to tell a regular customer that you printed his letter, so thanks for that.)

With all that said, I have never once considered buying the book or keeping it in my home collection.

I’m a Quaker. A Pacifist. A prude. Part of me was thrilled when you had Marko as a pacifist and showed us what a complex character D. Oswald Heist could be. But no, you killed the pacifist writer. And Marko is now out for blood after a drug trip he should never have taken. (I’m with Alex A. from Chicago.)

To each their own, yes? Well, my “own” is Superman. You know he’ll always do the heroic thing. To me, the heroic thing is trying to help people. With each new episode of “The Flash” that airs, my eyes get all weepy with nerd joy. (Don’t get me started on the trend of making anti-hero murderers popular.) Kind, noble, in service of others.

Or, I could take home a comic with a two-page spread of a monster self-appreciating itself? Oh, and then the first bit of dialog out of The Prince’s “mouth” are words that I won’t even retype. Sigh.

I don’t want to be a jerk here. All different books for all different people. I’ll suggest your book if I think people will like it. I can’t argue that it is expertly (obscenely so?) made by you, Fiona, and your team. You deserve all the awards and praise. I don’t like censorship and I fully agree with you that libraries should be offering all kinds of materials, not just books I like.

But I cannot fathom having this book where my retired dad or a 6-year-old niece could accidentally come across it. One more copy for someone else to take home, right?

I know I’m in the minority here. That’s fine. Maybe I’ll just flip to the end for now, read the letter pages, and put it back on the shelf for the next excited fan. A book discussing family and the sacrifices you make to stay together? Great. A books that kills everybody off violently and shows creatures with all kinds of body parts in all kinds of acts… uh, pass.

So I don’t mean to offend when I say I think I’m hopping off the Saga train. I just would rather not keep chugging along to where you’re headed. Safe travels.

Now, because BKV is spiffy enough to not only print such letters, but to also reply to them:

“If you’re still flipping ahead to this section, Philip, thanks for the very thoughtful letter. We’re sad to lose any of our friends (especially one from the Society of Friends!), but believe me, I know that this comic isn’t for most people, and I completely respect your decision not to read it or have it in your house. I wish I could prevent my own retired parents from seeing this parade of obscenity.

Still, I think it’s incredibly cool that you continue to recommend and sell our work to customers despite your own misgivings. Thank you. You were a good passenger, and the train will be lonelier without you.”

Now, I tried to be respectful and intelligent when I crafted my letter. “Your stupid. Your comic sux. Ferget you all”, is not how I like to treat people that are gifted at what they do. I aimed for the classier route.

Not surprisingly, BKV out-classed me. You have to cheer for a man who not only takes criticism, but responds to it carefully and in a friendly matter.

And, if you read the next letter, you will see I am not the only retailer who worries about small kids seeing the comic. 😉

I fully support the skills of BKV. He’s pretty great. But he does take his freedom of expression to the nth degree. (Shrugs) Like Wolverine, he’s the best at what he does. But what he does ain’t pretty.

As for me, I got printed in a comic! (Well, half a page of one.) And I was printed last millennium in an issue of Detective Comics. So my cred remains solid. I will never be comic-professional level. However, I like to think that you are in capable hands. …for now.

He's a simple enough fellow. He likes movies, comics, radio shows from the 40's, and books. He likes to write and wishes his cat wouldn't shed on his laptop.
View all posts by Cosand →
This entry was posted in Uncategorized. Bookmark the permalink.

2 Responses to The Saga of a Letter