The Mental-Dental Appointment (or, “How to Grin While Bearing It”)

My dentist is great; I love that tiny gal. She measures in at something like four foot five. I have been going to her since I was seven. Every time that I go in she jokes how I used to be shorter than her and now I am so tall. She is delightful, I will go to her as long as she stays in business, and she is the only dentist to get me a sugar-free cake on my birthday.

She is also out to destroy me.

I have friends that can skip their dentist for years. My former coworker spoke of how she had not had an appointment for three years, went in for a check-up, and walked away free and clear. I loathe her. I mean, I love her, she is delightful, and I am happy that her habits have paid off. Still, I wish she would get a cavity or two. Hrrmph.

I have been crowned more times than a checkers champion. I know dentistry better than I care to. Mesial, distal, fluoride, bridges; it is all locked away after decades of experience. I honestly think I have spent more time in a chair than Professor X. (And he gets healed every few years so he can leave the chair. Darn him.)

You decide: Dentist’s office? Or laboratory of an evil genius-scientist out to rule the world?

Perhaps you feel that I exaggerate. The following depicts my appointment from Monday:

That napkin confounds me. As soon as it is over my shirt, it magically gives the dental assistant license to put whatever they want on my chest. Picks, floss, clamps, pliers, tubes; they all end up there, simultaneously crushing my spirit and my ability to flee. I never agreed to rent that space to them. There was no lease signed. Do women let this happen? I would think that their extra curves would make for an inhospitable terrain for these intrusions. Maybe the curves create alcoves for the dental assistants to store their gear. I really do not know, but I fully expect a drill, a set of wind-up teeth, or a parrot to take up residence atop my shirt at any moment.

Now, to clarify, parts of me were numb at this point. There was a dime sized chunk in the middle of my cheek that felt no pain. Great, but they were not operating on my cheek. Nor were they going to fix my heart, which I could already tell had changed its rhythm due to the medication. The gums and tooth were still quite talkative.

By now, other parts of me have joined in on the fun. My eyelid was going numb, so it started to twitch and get lazy at the same time. And because my tongue likes to get in on the fun, it had joined the dime-sized cheek celebration and my even more noticeable heart rate. They started having a little kegger in my head. They were all a little fuzzy and incapacitated, but none of them were supposed to be the guest of honor. The gums and tooth still refused to join the party.

Happily, around this part of the fun-fest, the gas is in full force. Nitrous is the closest I will ever get to taking drugs, and it has been a few years since I caved. Everything that comes to mind starts to sound hilarious. My aspirations of being a stand-up comedian return. The face masks start to make the dental assistants look more attractive and more diabolical at the same time. (Thanks, X-Files, Fringe, and Twilight Zone.)

I was not responsible for this delay in the appointment. I went right before. I did not have gallons of juice or a coffee for breakfast. However, they kept rinsing. They drilled and they followed it with a rinse. They used suction, coupled with a rinse. They wanted a better look, so they rinsed. In an attempt to treat me for gangrene, they rinsed. Two hours after this, and yes, my bladder was a little full. It all goes somewhere, folks. Ease off. 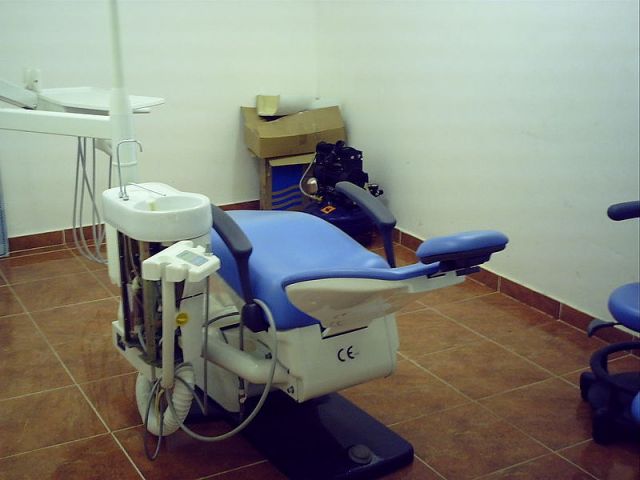 Notice how everything is tilted so that the center of gravity is the butt and bladder? Diabolical!
(From Wikipedia)

Through all of this time my dentist was pleasant and patient. She really is a nice lady. I know of other dentists, office cohorts of hers, who were less pleasant. Better hygiene through pain was their motto. She had wanted me to feel every little procedure. She did not apply pressure; she crammed and hammered it on. I half expected her to stand up, put her knee on my chest, and push until my skull changed shape. Every gesture inflicted suffering. Part of me wants to find that dentist and buy her some sort of yin-yang balls or some kickboxing gear. I think she needs a healthier way to get out her aggression than on my teeth.

For today, the nice dentist is done with me. There are other ways she can attack my self-confidence and my teeth, but she will save those for some other time. (She’s a long-con kind of operator.) Besides, there is still one more torment to undergo. Paying the bill.

Next time, I am showing up in a pair of purple pants that somehow expand to fit any size creature. I figure if I am going to sit in the chair any longer, and get x-rayed anymore, then the world owes me super powers. I feel like I should give my dentist powers too so that we are evenly matched, but then I remember that she already has an arsenal of sharp weapons to wield against me.

I wonder if the Hulk’s teeth are as indestructible as the rest of him.

He's a simple enough fellow. He likes movies, comics, radio shows from the 40's, and books. He likes to write and wishes his cat wouldn't shed on his laptop.
View all posts by Cosand →
This entry was posted in Uncategorized and tagged dental, dentist, hulk, humor, life, medical, pain, surgery, teeth, x-men. Bookmark the permalink.

1 Response to The Mental-Dental Appointment (or, “How to Grin While Bearing It”)