Over-Obsessing is not Overly Endearing

Shall we talk a little Amazing Spider-Man?  First off, just skip it (both of them).  Go and watch the Sam Raimi ones and you will be a happier person.  I mean, the very idea that Gwen can break Spidey’s webbing alone is enough to drive me nuts.  However, it seems to be one more movie that seems to thinks guys stalking girls is romantic.

It all started with a link that my friend posted.  Read here about whether or not women should say, “I have a boyfriend”, and a response on why that might invite abuse.  The short version is that the only proven way to get a guy to back off is to say that she is taken.  There is no stopping the juggernaut-minded fellow who simply -must- get a woman to go out with them.  Such is the case with Peter Parker.

In Amazing Spider-Man 2, we start off with Peter and Gwen having a rocky relationship.  Finally, Gwen has enough.  “I break up with you”, she says.  It could not be any simpler.  It is right there.  No more relationship, right?  Sadly, no.  The next time that they meet Gwen finds out that Peter has been following her.  Only a little bit right?

“Only once a day.  Sometimes… more.”  Apparently that went on for at least a month.  Creeeepy.

After Peter admits that, what does Gwen do?  There is smiling, there are little gestures; she does not seem to mind that he is infringing on her privacy every single day.  Argh.

When Gwen is about to interview for a scholarship, what does Peter do?  He interrupts her.  He stops Gwen from getting to her appointment on time.  It is all about him.  He so desperately has to talk about his problems right that second that he is putting her future at risk.  Argh again.

All of this is made out to be romantic.  “He cannot live without her”, and such.  In essence, if the guy really loves the gal, then stalking is okay.

Don’t believe me?  Check out this mock-trailer for Star Wars: Episode II- Attack of the Clones.  In there, you can see how Anakin is played off as all kinds of psychotic and it is supposed to be okay.

I indulged in a little Sports Night.  Of course, I forgot that Aaron Sorkin is just as guilty as Spidey and Lucas.  One of the sports anchors, Dan, thinks that an analyst named Rebecca is cute.  So he goes down to her office and asks her out.  Repeatedly; seventeen times, it is suggested.  He guilt-trips and enlists his friends to go down and talk her into dating him.  (As if being attracted to someone is something that can be “talked into” a stranger.)  And after two or three episodes of going down to her office and interrupting her work when it is convenient for him (she makes it clear several times that she is busy), she, naturally agrees to go out with him.

Studio 60 is just as guilty, and I really like that show.  The winter-break-finale episode, “The Christmas Show” is one of my favorites.  And in this episode they do it right.  The episode features jazz musicians from New Orleans and they play an amazing rendition of “Oh, Holy Night”.

During that breath-taking performance, we see the director, Danny, go and announce his attentions to his boss, Jordan (Sorkin loves his shows about shows).  This moment was handled quite well.  Danny announced his attentions and was upfront and honest.   I have it on good authority that honest can be sexy.

So what happens when they come back in January?  The very next show has Danny calling and texting and calling and pestering and calling Jordan.  He asks her out repeatedly, uses a different phone; he essentially bombards her with romantic attentions.  His need to be around her seems to drastically overwhelm the amount of respect he claims to have for her.  So what happens a few episodes later?  She agrees to go out with him.  Argh part III.

The frustrating part is that Sorkin knows better.  A supporting character on Sports Night says, “If you love her, let her go, Danny”.  Also, most of the relationships on The West Wing were non-psychotic.  The Sam-stripper was a little borderline stalker, as was Danny to C.J., but nowhere near the “I’ll just hang out here and call you plenty” that the other two shows were.

What if we look at women-stalkers?  Well, then it just becomes even worse.  The two that leap to mind are All About Steve, where Sandra Bullock stalks Bradley Cooper across the country so that she can be near him.  The whole thing looks unfunny and awkward.  Thanks to the teenager-horror crowd, we get Swimfan, where a girl seduces a guy with a girlfriend (from the trailer, he looked pretty willing).  He later shuts her down.  She responds by sending a bevy of messages, hangs out at his house, and then tries to kill his girlfriend.  Ack.  Oh, and All About Steve logs in a whopping 7% on RottenTomatoes, while Swimfan faired only slightly better at 14%.  To put it simply, people disliked these flicks.  Somehow though, it appears that it is a bit more acceptable for guys to hang around endlessly than for women.  Guys can still be “brooding” or “following their destiny” while the women come across as eleven kinds of wacko.

Look, Mr. Darcy did not follow Elizabeth every day of their lives.  Lois Lane is a complete and competent character outside her relationship with Superman.  Black Widow may flirt with Captain America but she has her own life goals.  But even Wall-E followed Eve wherever Eve went (though the case could be made for curiosity in that one, not perversion). 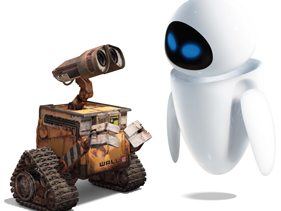 I will not say that I am an innocent party in all of this.  I have been a little too-attentive with two women in my life.  (My only excuse is that it was college and I was dumb.  You maybe slept with the wrong person or drank too many beers; I am guilty of this.  We were all young and stupid.)  My relationships did not get better because of my showing up at their doorstops or constantly helping them with things at work that they did not need help with.  Once I learned to give them space and let them breathe, we got along much, much better.

Movies, I am going to need you to do better as well.  Be more like the two kids in Super 8 who naturally became all cute and smitten.  Be like the couples in Pitch Perfect who hang out together, but not in every single place every all day.  And certainly, do not encourage your audiences to do so.  The last thing we need is for more people to put their wants and desires in the way of other peoples’ work schedules, obligations, and life in general.  More She’s Out of My League and less Basic Instinct.  Guys are not supposed to beat women, so why keep convincing us that they can beat the object of their affection into submission?

Or, to look to someone wiser:

“No man is good enough to govern any woman without her consent.” -Susan B. Anthony

He's a simple enough fellow. He likes movies, comics, radio shows from the 40's, and books. He likes to write and wishes his cat wouldn't shed on his laptop.
View all posts by anecdotaltales →
This entry was posted in Uncategorized and tagged attraction, dating, life, love, movie, rejection, relationships, stalking, television, tv. Bookmark the permalink.